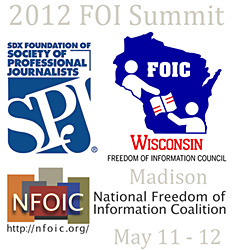 COLUMBIA, MO — Gene Policinski, senior vice president and executive director of the First Amendment Center at Vanderbilt University, has been chosen to deliver the keynote address at the 2012 FOI Summit May 11 and 12 in Madison, WI, the National Freedom of Information Coalition (NFOIC) announced.

The annual FOI Summit, a national conference held in collaboration with the Society of Professional Journalists (SPJ), will be held at the Madison Concourse Hotel and Governor’s Club in downtown Madison. NFOIC is partnering with the Wisconsin Freedom of Information Council (WFOIC) in hosting this year’s Summit.

“The program is shaping up and we are excited to have Gene to headline a distinguished array of speakers and presenters,” said Kenneth F. Bunting, executive director of NFOIC.

The list of confirmed speakers and presenters for the Summit include civic and government leaders, as well as experts on open government issues and the First Amendment.

In addition to Policinski, other panelists and speakers include:

Planned panel and program topics include fighting FOI erosion at the state and federal level, transparency in the post-Citizens United world, the impact and issues surrounding instant digital photography as a source of public information, and the troubling practice on the part of state governors to keep their schedules hidden from citizens and journalists alike.

Saturday’s keynote luncheon will also feature the induction of a worthy individual into the State Open Government Hall of Fame, a tradition NFOIC launched in collaboration with the Society of Professional Journalists in 2003.

“The Wisconsin Freedom of Information Council is proud to host this important event, at what feels like a critical juncture for open government in Wisconsin and throughout the nation,” said Bill Lueders, president of WFOIC. “The lineup of speakers and panels is outstanding and will surely inspire a vital renewal of commitment to our cause.”

The Summit shines a light on the federal Freedom of Information Act (FOIA) and offers an opportunity for NFOIC members and others to get a clear view of disclosure and access laws, state by state. The conference brings together access advocates from all over the country to highlight recent successes and share ideas for combating secrecy in the future.

The Wisconsin Freedom of Information Council is a statewide nonprofit and nonpartisan group devoted to protecting public access to meetings and records. Founded in 1978, the WFOIC tracks legal and legislative developments that affect these areas, and works to educate the public on the importance of open government.